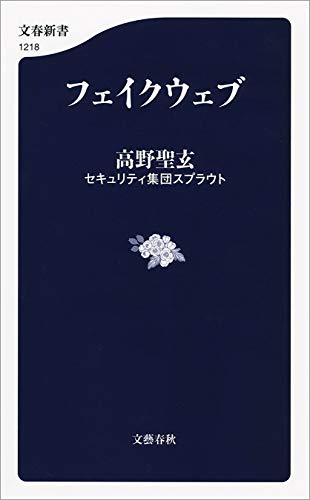 This article can be read in about 2 minute 44 seconds

Advances in technology are also advances in crime

As the saying goes, "The Masago on the beach is exhausted, but the seeds of thieves are exhausted in the world."

However, there is nothing new in the depths of the elaborately assembled genius crime, it is nothing to be amazed at, and as usual, gold, gold, gold.

Well, let's give up that crime is a human saga.But I think it's time for humanity as a whole to make a little more progress.

The probability that a fake will be retweeted (RT) is 10% higher than the fact, and it spreads even faster, and the spread range is about 1000 people, while there are many fake that are in the top 1% of the spread scale. It is said that it will spread to a maximum of 10 people.This means that even if one tries to stop the spread of fake news and to follow up on the correct information, it cannot be easily overturned.

In addition to fake emails and messages, there are cases where fake website addresses are posted on SNS such as bulletin boards and Facebook to guide them.In such a case, the viewer is tried to deceive by changing the alphabet "o" (o) in the spelling of the address to the number "0".You may still notice the number "0", but in some cases it is more subtly disguised as the Greek letter Omicron lowercase "ο".

It is said that the idea behind the hybrid warfare originated in the "Unrestricted Warfare" released by two Chinese military personnel in 1999.And in 2, Russian Chief of Staff Valerie Gerasimov, the large-scale democratization movement "Arab Spring" that occurred in the Arab world from 2013 to 2010 is a typical war in the 2012st century and has been traditional. I see one form by pointing out that it is wrong to say that it has nothing to do with military personnel because it does not use the military weapons of.
Gerasimov said attacks by non-military means were more effective than traditional military weapons, with a 4: 1 ratio of non-military and military weapons, with non-military means being higher. (Omitted) As long as democracy is made up of discussions, there is an idea that if the discussions are distorted or based on incorrect information, the conclusions will also be distorted.