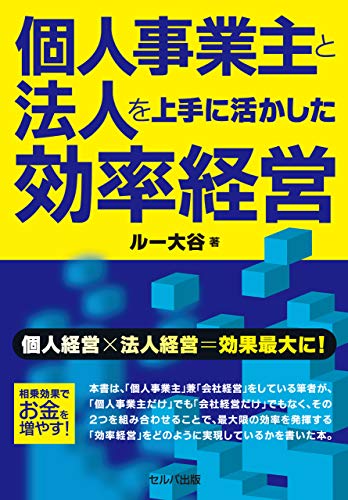 This article can be read in about 3 minute 29 seconds

Generally, it is said that the timing of incorporation is when personal income is 600-800 million yen or more.

However, after reading this book, I decided to incorporate it immediately (incorporated as a limited liability company Shintaku three months after the start of freelance).

In fact,If you can eat meals for a couple of months as a freelancer, you should incorporate it immediately.I think.

It's a great deal even if you're single, but it's even better if you're a married couple.

There is a vague image that national insurance is cheaper than social insurance, but it is not.

Need to learn how tax and insurance work

No matter how much profit you make, it doesn't make sense if you take it with tax or insurance...For self-employed people including freelancers, not for office workersIgnorance is the greatest risk.

If the executive compensation is set to 80 yen or less per year, the social insurance premium will be the cheapest.Therefore, it is advisable to create a corporation and pay executive compensation of about 72 yen per year (72 yen per month), but if all the income of the current sole proprietor is transferred to the corporation, profits will remain in the company and corporate tax will remain. May occur.Therefore, as the first recommended method, out of the original income of 28 million yen, XNUMX million yen is left as the income of the sole proprietor, and only XNUMX million yen is used as corporate sales.If you do so, you will be able to pay XNUMX yen as executive compensation, and you will be able to use the remaining XNUMX yen as tax accountant expenses such as corporate tax payments and financial statement preparation fees.

Company management is also a battle against taxes

The salaryman population in Japan is about 90%, but theyThe bad tax withholding system has reduced tax awareness to the utmost limit...It is no exaggeration to say that Japanese people are not aware of tax payments.

On the contrary, self-employed people need to file a tax return every year, so they know the amount of tax to the core.for that reason,Inevitably, tax savings, that is, a sense of resistance to taxes, is born..

It's been less than a year since it was incorporated, so I can't say anything big, but there is no loss in being incorporated.surely.maybe.Probably.

Previous article In 2025, people will stop "shopping" Next article Any receipt can be dropped at an expense